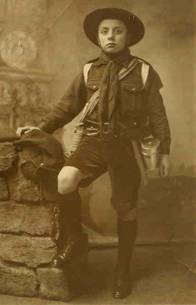 How Scouting came to Holland

Scoutmaster Bernhard Blythe of 16th Oxfordgroup had taken the idea to make an excursion in the summer holiday to the main land by bicycle, together with a number of boys. To plan his trip he contacted "Jongelingen Matrozenkorps Jong Nederland” in Rotterdam and journalist Gos de Voogt in Amsterdam. On Thursday August 4th he arrived in Rotterdam with six boys, chosen as the best by skill tests. Here they were welcomed by the members of the Matrozenkorps, who would grant hospitality to the patrol. After several guided tours in Rotterdam and visits to The Hague and Scheveningen the scouts left on Monday the 8th of Augusts to Amsterdam, where they were welcomed by Gos de Voogt who had ensured their lodging. After a stay of two days in Amsterdam the British Scouts continued their hiking tour through the Netherlands and Belgium. Finaly they left the European mainland on August 17th from Rotterdam to go back to Oxford.

In Wassenaar the National Camp was organised from 2 till 12 August.

The camp, on which several foreign groups participated, was officially opened by HRH Prince Hendrik on the 3rd of August. The sea scouts had situated their camp at the Kagerplassen. This camp was also intended to be   a test camp for a possible jamboree.

On Thursday the 11th of August Baden Powell visited the camp.

At first, Scouting could still play its game undisturbed, only camping wasn't possible and outdoor activities were almost impossible. Very soon it became clear that it was the intention to abolish all existing youth associations and to form one national youth movement together with the “Nationale Jeugd Storm“ (NJS) (the national socialistic youth movement). However the “Nationale Padvindersraad“ refused any cooperation.

In 1946, the Driehoeksmeisjes (Trianglegirls) linked up with Scouting and in 1948 the scouting groups of the Salvation Army followed. The girls joined the NPG and the boys joined the NPV.

The fiftieth anniversary in 1960, was celebrated in Ommen with an international leaders gathering, “Indaba“, and in Amsterdam the event “Youth and flowers“ took place bij boy scouts and girl scouts.

Following Canada a new age group for boys and girls from 5 - 7 years started in 1985: the bevers (beavers). They played in De wereld van Lange Doener (The world of Lange Doener). As more and more of the Scoutinggroups started to play with both boys and girls, a mixed unit started in 1991 for the age from 7 till 11 years: the Estas who play in Het land van Esta (The Land of Esta). In new unit for the same age started for the waterscouts: Dolfijnen (dolphins), who play on Het dolfijnen-eiland (The dolphin island).

In reorganisation took place in order to reduce the distance between the groups and the national level. Districts were combined and transformed into regions and the counties were banned. Servicepoints came to support the regions.